Any way to get a rhythm from the tsugaru notations?

Just curious. Working on Kuroishi Yosare Bushi right now.
I would newer guessed what kind of rhythm used for this piece if not for crash course video from Kyle.
How a person supposed to know what king of rhythm the piece got if no audio or video available?
Is’t it supposed to have correct measures marked in tabs?

Is’t it supposed to have correct measures marked in tabs?

I’m not sure I understand the question.

Kuroishi Yosare Bushi has four beats per measure, with the exception of measure 35 (mistakenly marked as a second “34”) which has a funky repeat in the middle of the measure, so it’s four beats only on the final play through. The number of lines under the position numbers indicate note duration. The more lines, the shorter the fractional duration.

I can read western musical notation and I find bunkafu a pain.

I wish it were more like this ukulele TAB: 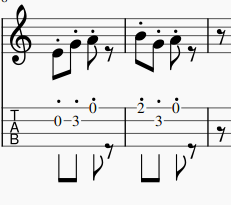 (this is an example from musescore; with professionally printed TAB the stems go all the way up to the fret numbers)

The Bachido crash course places emphasis on learning by ear with Kyle, so my guess is that additional markings such as time signature, beats-per-minute, etc. are viewed as unnecessary in the pdf.

Yes, it has 4/4 on the paper. But if you listen to the course it is syncopic! It is nowhere in the tabs!
Those beats are not even in the video.
Taa-ta-taa-ta. This is what I mean in my question

I have seen bunkafu that denote syncopated or swing rhythm, as shown below:

If the bunkafu or western notation provides this to you, then you’re set. Unfortunately, most of the bunkafu that I’ve seen doesn’t display that information. The best reason that I can think of for this is that most people learning shamisen and using Japanese source material likely have a teacher to guide them through each piece. They are also likely to be familiar with the sound and feel of the piece they’re aiming to learn.

The best recommendation that I can give is to search Youtube or iTunes for a version of the song you like best, and listen to it until you have a solid feel for it. Then when you try and follow along and the rhythm should come more naturally.

As for the Shamisen of Japan scores, Kyle has provided audio for almost all of them here:

Thanks! This is exactly the point I was trying to make: the tribe knowledge of a kind. If you have a teacher or if you are lucky you would have rhythmic pattern mentioned somewhere. Good luck figuring it out on your own if the piece is not available on YouTube.
Just curious, is there a description of “classic” bachi patterns for different shamisen styles?

If you learn from a teacher, you’re generally learning songs as they’re sung either with lyrics or so-called guchijamisen.

Guchijamisen is a set of onomotopeic words that indicate string and strike style which can be sung to the rhythm. With lots of experience you can start to guess at rhythm patterns in different songs based on their lyric guides, or how other songs in similar classes (ondo, bon odori, etc.) sound.

The Fujimoto books, the guys behind bunkafu, are fundamentally about getting people to join their schools to make money. Consequently, the most you’ll ever seen is some slight notice on beat or tempo.

Re:bachi pattern. Do you mean play style?
There are a few different bachi patterns, but they’re usually regional. These tend to have an iconic song or two and have consistent patterns. One of my colleagues plays in
Akita-biki and the other in Tsugaru-biki.

The former has a consistent rhythm that utilizes almost constantly up and down strokes.

The latter is the more familiar bachidzuke, and fairly heavy use of delayed Suri.

A former coworker developed an offshoot of the local Johana-machi way of playing that places heavy emphasis on chin-chi-ri embellishments (strike, upstroke, immediate hajiki). So much so that his hand seems to blur up and down the sao.

If, on the other hand, you mean the rhythm or groove of a piece - the answer remains yes. There are regional arrangements of songs that grow out of other songs.

Is there a word for when two notes are consistently played in a special manner?

Good luck figuring it out on your own if the piece is not available on YouTube.

For what it’s worth, a number of shamisen sheet music books come with CDs attached.

Thanks Christopher for the professional input. English is not my native language, so, it is difficult sometimes to formulate the question or sentence correctly in order to get the desired answer

Talking about bachi pattern I was referring to both the rhythmic part an the sequence. The sequence is well described in the tabs (downstroke, upstroke and etc.) The rhythmic part is mostly omitted as far as I can tell with some exceptions.

I would call it pattern but again, English is not my native language…
Yes, seems like I would have to find the way to listen to the pieces I am learning

On another note, in the scorebook you get from the shop, it’s written like this.

You’re not that off with a 6/8-Beat, you could also write it like that in ‘western style’

Is there a word for when two notes are consistently played in a special manner?

Apparently it’s commonly referred to as “swing-feel” or “shuffle-feel”, or at least that’s what my husband (the musician in the house) just told me.

I showed him the video where Kyle claps out the four beats (Crash Course: Volume 1 Chapter 7: Measure 1) and then I showed him the final version (Crash Course: Volume 2 Chapter 20: Entire Piece) and in his words, “The melodic contour is generally the same but the beats have been moved.” He absolutely agrees with you that it sounds like 6/8. He says he can’t hear it any other way than 6/8.

Ah! Yeah. You basically have to guess.

The title of the piece can sometimes provide clues, as does the spacing of the positions themselves. You can sometimes get information by looking at the original prefecture or area.