This trunk was given to me in 1980 by an older gentleman and his Japanese wife. It went into my attic and got buried, I finally found it today. It appears to contain a Shamisen in pieces with many parts, skins, and tools. As far as I can tell it is only missing a bridge. I assume it is from the '40’s or 50’s.Can anyone assess the age and quality from the markings? 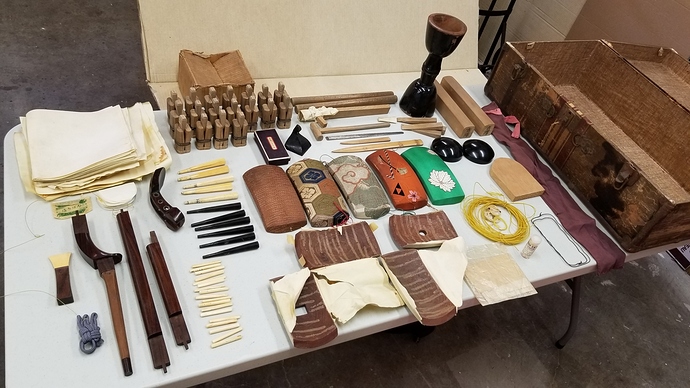 Thanks so much for responding.
I don’t know anything about Shamisen, but I think the Gentleman gave me the trunk because I was a professional guitarist at the time and he knew me as a dedicated craftsman. I can tell the hardwood is very dense (like zebrawood, ironwood, etc.) and all of the tuning pegs and nuts are solid ivory and ebony.
Can anyone tell me anything based in these markings? 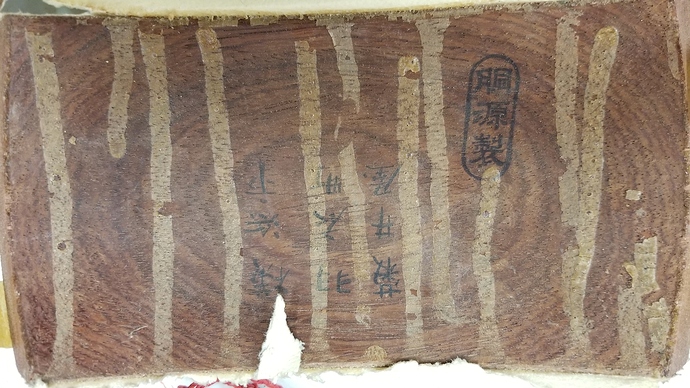 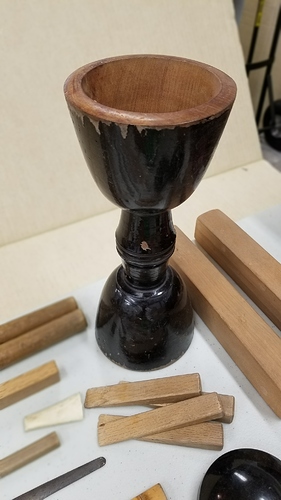 It looks like the body of a small hand drum (kotsuzumi?). Otherwise, woaaaah!!! That´s like a huge treasure! 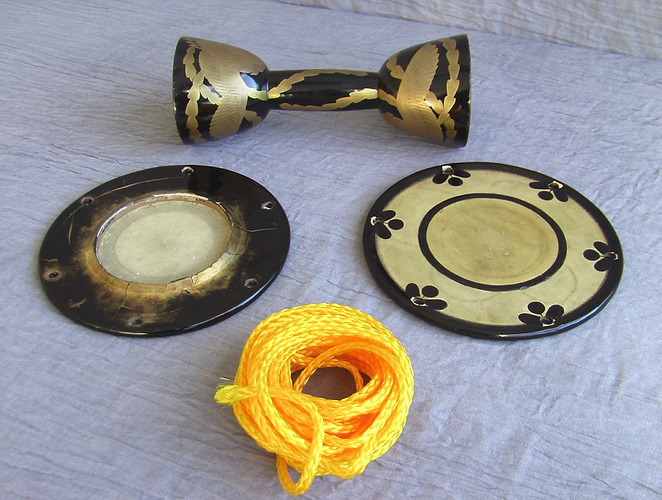 Thanks for the replies!

Patrick,
What is that? It looks similar.

Stephanie was right. It is a kotsuzumi ( a small hand drum). Lucky you !

The first picture’s markings are likely the maker’s identity, and location of the shop.
Looks like the shop was in Yokohama.

I am so interested to the skin stretching gears and the amount of spare skins there is.
Wonder what skin they are!
Maybe your pegs are ivory?

Also looks like the kotsuzumi is incomplete, has no heads and robes.

I’m curious if there is any chance of getting a clearer pic of the kanji in the shamisen. I can clearly make out that the information in the oval upper left states where it was made, something to the accord of “made by”, but the information to the left of that is rather difficult to read. In addition to that portion being handwritten (the oval area is stamped), I’m terrible at reading family and city names. Unless I’ve lived there, or frequently traveled an area, I have to look them up in a kanji dictionary using the root.

In addition to this, urban sprawl is a VERY real thing in modern Japan so a lot of towns which would have existed 40+ years ago are now part of a larger metropolitan area. While I’m not disputing that there is a possibility urban sprawl has consumed the original area to become a portion of Yokohama, written in kanji as 横浜 , I can’t see anything which completely verifies it.

Glue, dust, and glare make it too difficult for my old eyes to accurately make out much of anything beyond the stamp well enough to say “This is it”.

@Larry, the section in the oval stamp is right side up. The handwritten portion is upside down, which might have been why you had trouble there.

@slipdisx The oval stamp says that the dou is made by Minamoto.

The handwritten portion from right to left says:

It currently falls into the Hanasaki-chou area of Naka-ku in Yokohama. It looks like Hanasaki-chou has been around for a while, so I might have just had trouble with the handwriting in the second line there. Usually they’ll put the customer and date info inside the dou too, but I didn’t see it in the pictures you attached. Hope that helps.

Nonetheless, I believe you have found the shop.

Amazing find. Would you consider selling a set of itomaki?

Holy cow, what a treasure chest that is!!

I think there’s even some koto strings there! Great stash, Brad!

May I ask, would you be willing to part with those skins?

I could put them to good use if you don’t need them.