So basically to put it straight I received my Nagauta Shamisen a week ago and started practicing it,I decided to use Niagari tunings which I believe was C/G/C.When I started plucking the strings I noticed how my ichi no ito and ni no ito sound a little like a Ukulele when plucked softly and more of a banjo when plucked hard.My San no ito literally sounds like a banjo when plucked in anyway.

I use a plastic koma and bachi but as another note my ni no ito broke so I tied it back together using a sheet bend,it works normally I think but I think I will require a new one.And on both sides the top right and the bottom left isn’t fully stretched as its edge meets exactly with the end of the Dou.I can have Sawari but it still doesn’t sound like a Nagauta shamisen.

Anyone have some solutions that can help me?
If I can I can have a sample of how it sounds like later on.

It’s difficult to diagnose your problem without seeing your instrument. Please show me a picture of your instrument with the koma inserted. If you can, a recording of the sound it makes would also be helpful in figuring out what’s going on.

Ok so I have the images 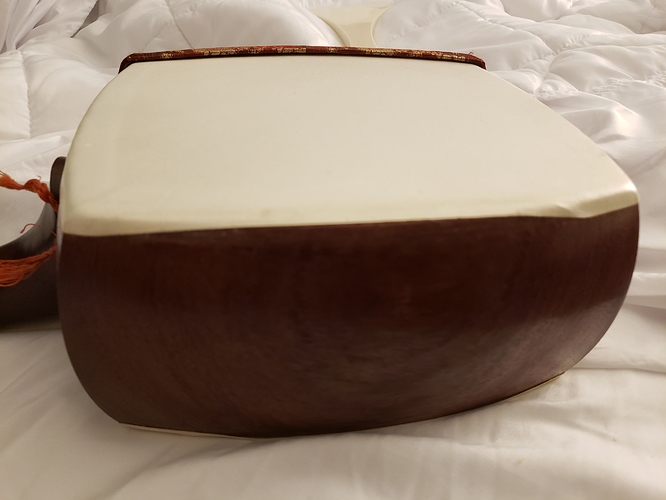 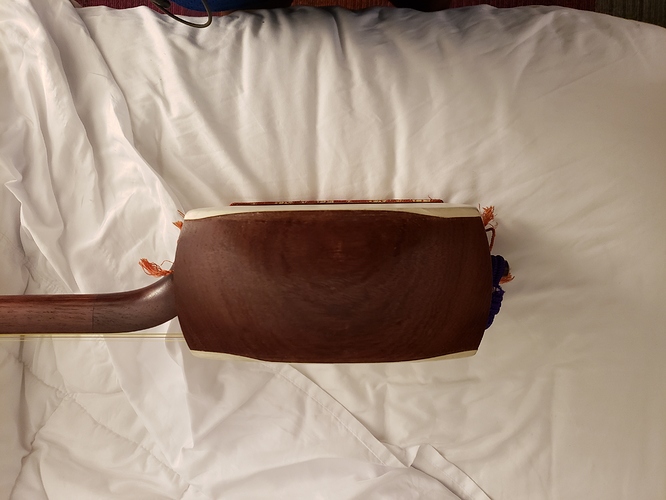 The dou is fine but here are the not completely stretched parts of it.
The first image is the top right.
the second is a side shot of both sides.
The last is the bottom left

And this is the sound sample with me incorrectly holding the bachi.I believe its tuned to Hon Choshi which is C/F/C

Thanks for the visuals and the sound example, it helps a lot. I see a few things that might explain what you’re hearing.

First off, there’s nothing really wrong with the sound your shamisen is making, but I can see why you’re concerned. There’s really no sawari sound, is there! You may need to adjust the yamasawari by adding or removing material - but before you do that, let’s talk about some other points.

One you might be able to fix, the second you’re going to have to work with and around

First, your koma! It looks a little high to me. On a nagauta or min’yo shamisen, the koma should be placed approximately the width of your index and middle finger away from the edge of the dou. In Tsugaru, the larger dou usually necessitates an additional finger width.

Second, your skin (like the shamisen itself) looks old. It’s likely less taut than it used to be, leading to that warmer, boxier sound. Gently press on the center of the skin with the koma removed. Does it go down a little bit? If you flick it with your finger, does it sound like an empty box or a taught drum? The sides peeling off tells me that it’s probably on its last legs.

Your ni-no-ito (2nd string) should be replaced when you can, but it’s probably not the cause of what you’re hearing.

Ah, and yes. Your bachi grip is very interesting, but if it works for you, that’s fine.

Orthodox bachi grip is more along these lines :

Different players have slightly different variants on this, but the idea is that you should be able strike the dou to create a percussive beat and play the strings, focusing on one or the other as needed.

Ok so I pressed my finger on the middle and it doesnt really press down, it seems solid enough.Which uprises me because there is no hide glue holding it down
,if I do i softly I can lift the skin revealing the inside of the Dou.The sound is probably close to a taught drum since im assume the other sound is of an empty cardboard box when I flick it.

Also I can have the sawari effect if I move my ichi no ito into the corner of the end of my kamigoma but the effect doesnt really change the san no ito it still sounds like a banjo.

Don’t pick at where the skin is peeling up, it’s likely that the noriko that attaches the skin to the wood is starting to deteriorate. The shamisen I started on had a similar appearance, but it remained playable for a while.

Your ichi-no-ito, the first and thickest string, should not be resting on the kamigoma, but adjacent to it. This allows the yamasawari to create the sawari sound.

The sawari sound will always be particularly strong on your ichi-no-ito. This is totally normal.

It only exists on the ni and san due to a harmonic loop created by the strings, skin, and koma. On nagauta shamisen, the sawari sound can be particularly muted since you cannot adjust the height of the yamasawari easily. Thus you will find that different tunings will tend to have more or less of a sawari response.

Furthermore, please make sure that the back of the instrument is not resting on your body. The relatively small size of the resonator means its highly susceptible to being muted by nearly any sort of interference.

Speaking of the skin is there a way or service to restretch it or do I have to get the skin entirely replaced?