I create this thread to share the shops we know in Japan that sells shamisens. Hopefully cheap studio ones

I have this adresses that I found searching the net, but I don´t know anything about this shops. Never go to this shops and I didnt know what they have, but it´s a begining

If this thread infringes any rules written on the forum, I beg pardon, and please delete it.

This is the shops I know that sells shamisen:

Here is a list of most of the instrument stores all across Japan. if you don’t read Japanese (I only read hiragana / katakana and a very few kanji), you can use Google to translate the names and addresses for you:

hi paco! im not sure what the price range is, but ive visited Yamatoya in Toyohashi City, Aichi, and it seemed like a nice place. i bought a bridge and a mute from them, both of which are working great!

for us who dont live in japan the best shop is indeed Bachido store!!!

To me, Bachido Store is the only store for shamisen.

Except Katou san’s shop, of course. That guy has a really cool shop and is a must-see if you are ever in Tokyo area.

@Paco - I’ve had some friendly dealings with the wife of the owner of Asano Gakki in Kyoto. They’re very nice people, and it’s a traditional, small shop (as are most of the gakki-ya I’ve visited in Japan).

If anyone happens to be in Kyoto, Asano also has a beautiful collection of antique koto ji (bridges) and shamisen itomaki (tuning pegs). I particularly liked the ivory itomaki carved in the shape of chidori.

I’m a new member and I’m joining this topic for I’m looking for shamisen stores in Japan.

I thought it may be the perfect occasion to touch and try the instrument, and come back with one if I can. I’m mostly interested in Tsugaru Shamisen music and would like to find the most suitable shamisen for it. I’m leaving next week and will visit Kyoto, Nagoya, Takayama and Tokyo.

I found two adresses in Tokyo (Ohtsu-kotosangen and Kameya), plus the ones given here (btw: Kyle, what is the "Kanto-san’s shop you’re talking about ?).

But I would really appreciate to have your opinion and advice as I don’t know where to go, what to choose… Thank you very much for your help (and sorry for my awful English).

Katou san is a wonderful man, very encouraging and supportive of Gaijin shamisen players. I go to his shop whenever I’m in Tokyo (which hasn’t been all that much, but hopefully more as the years go on 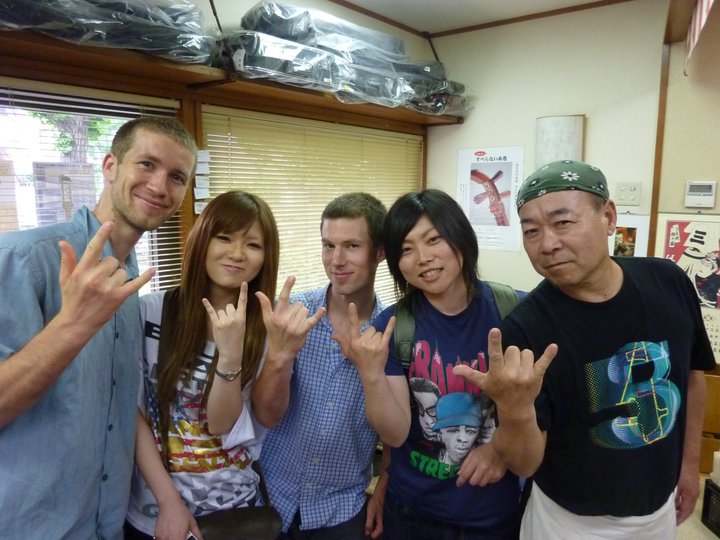 If you’re going to be in Tokyo, I heartily recommend going to Katou san’s shop, (Shamisen Katoh - http://www.shamisen-katoh.com/ ). His specialty is Tsugaru shamisen, so he’d be the person to talk to. If you go, tell him that the Bachido crew says “yoroshiku!”

Kevin had made a video to help people find his shop. 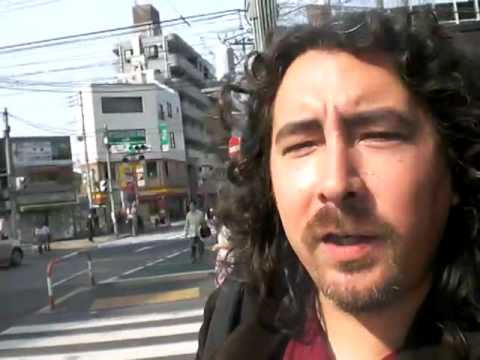 He be on Facebooks as well!

Your English is great! Better than mine sometimes.

(I’ve given up on grammar, apparently)

Thank you so much Kyle!

That’s exactly the kind of adress I was looking for!

My Japanese is not very good, so I must admit I was stressing about the idea of going to a Japanese shop and speaking about music and instruments with my weak vocabulary.

But what you say about Mr Katô is very encouraging! I feel relieved and I’m eager to be there

I don’t plan to buy a very expensive shamisen (well, technically, I’m not against the idea of course, but my bank advisor surely will). But I don’t plan either to come back with a bad instrument as it surely would happen if I’m not able to talk a bit with the seller, or if I can’t trust him.

What I mean is that, as a total beginner, I don’t need a super-terrific-shamisen right now. I don’t even know yet if I’ll enjoy playing it. But I know how a poor quality instrument can be, how shall I say… “misleading”?

Of course, it’s not the quality of an instrument that makes us play well or not but, still, I teach the harp and when I have to play on bad quality rental harps, the sound is so bad that it doesn’t make me want to play the harp anymore ^^

So I want to come back with a good instrument. Not the best, but a good one I could perform with during concerts, if one day I’m good enough to play the shamisen in my music band

Lucie, as a music teacher myself, I hear you about the quality of the instrument one plays! FYI, Katoh-san (and most shamisen dealers) generally have several levels of shamisen available, from scratch beginner up to concert level instruments. There used to be three general “divisions” or levels: karin (花梨 quince), shitan (紫檀 mulberry? sandalwood? rosewood?) and kouki (紅木 rosewood/redwood?) [Sorry, I’ve never been sure how to translate the last two, everbody has given me a different answer. Kyle, you’re our tree man, any definitive English translation to explain the difference between shitan and kouki?] Over the last few years, some dealers have told me that shitan is almost farmed out and is therefore almost as expensive as kouki, so for that reason, they’re starting to use a cheaper grade kouki for the mid-range, in place of shitan. So if you don’t want to go as low as a “bad quality rental” shamisen, it would be worth asking about the mid-range shitan one, if you find a dealer that still uses it, or failing that, a “lower quality” kouki one.

Just jumping back to the Shamisen Shops,

I highly recommend Mikado in Asakusa.
They are the suppliers to several major players in the shamisen game, and are unbelievably helpful and friendly.

When I wanted to get started, I visited a few shops that were less than helpful.

Mikado whipped out chairs, sat me down, and taught me all about shamisen and everything I would need to know to get started (this was before I knew of bachido)

On top of that, they were VERY kind in their pricing, and have continued to be just as kind ever since.

When we held the First Ever Bachido Gathering in Tokyo, we swung by Mikado to do some shopping, and they had prepared gifts for everyone who came (and even left me with extras in case anyone showed up a little later)

Definitely a place worth swinging by~

Hey Lucie,
You made it to bachido! Welcome!
Wishing you safe travels and best wishes for you
To find a “Good” instrument!

wow amazing! too many responses! I apologize because I was out this weekend, and I can´t answer properly.

thanks to all for the information!

I will process it by now!

@Linda, the links that I share in this thread, you share it in another forum? I´m pretty sure that are the ones I see last time ago.

I will put my limit in 350 $, I hope I can find a nice one in japan for that price.
I have found this information about Mikado in Asakusa:

have all a happy monday!

Yes, quality of instrument is so important, even when we are only beginners… how many students have I seen having bought very bad quality instruments or tiny tiny harps (made only for practising while travelling) because it was cheaper, but most of the time, they just couldn’t play and had no pleasure in playing.

Thank you very much, I’m adding this adress to my “shops to visit” list! It’s good to have another good adress in Tokyo.

Yep, I made and it’s thanks to you. And I’m sure it will be thanks to this forum and members that I’ll find a “good instrument”

Hey Lucie, welcome! When I started out I felt like you. I don’t want to be held back by a crappy instrument. I therefore bought the instrument that had all the features (azuma sawari and dog skin) but not the highest quality wood. While Kouki might make the sound even better, I felt that it is probably such a subtle difference that I would have to become very good at the instrument before that would matter. Should such a situation occur, I know I would get another shamisen and keep this one as a practice instrument.

Anyway, I’m happy with my instrument and my choice was definately the right one.

Thanks a lot, I was looking to the differents features and best choice to make. Your advice is definitely helpful because I was hesitating between natural and synthetic skin, thinking that a good wood was more important (stupid me)

If Bachido was selling some other natural skin, like calf, I would probably have gone for that as my first shamisen. I know dog skin is definately better sounding, but the difference between synthetic skin and real skin is really huge. However, the new synthetic skin sounded really cool. Maybe you don’t need the dog skin as a first instrument after all. I’m sorry if I create more doubt for you now that you say you were hesitating

Regarding the wood I think it’s just a situation where both wood types are really good and Kouki is just a bit better.

Well… Anymay, I think I’ll try the different instruments, if I am allowed to do that :).

I know what kind of sound I’m looking for, so I’ll try to find the closest sound possible among the differents shamisen I can afford.

If I was so focused on the wood it’s certainly a bad habit coming from my instrument.

As always, I preface this with “I could be wrong…” That’s a good attitude to have. If an instrument sounds bad to begin with, it’s not going to be fun to play. You don’t have to be good to be worthy of a good sounding instrument.

If Bachido was selling some other natural skin, like calf, I would probably have gone for that as my first shamisen. I know dog skin is definately better sounding, but the difference between synthetic skin and real skin is really huge. However, the new synthetic skin sounded really cool.

Regarding the wood I think it’s just a situation where both wood types are really good and Kouki is just a bit better.

I believe the differences are slight. Note, only the sao/tenjin are made from Kouki. The dou is still made of Karin wood (better Karin is used with kouki sao, but still Karin nonetheless).

Update information of TsutayaGakki, thanks Jeremiah Turiaga for the info

Hi there. I am currently near Shimada-shi (Shizuoka-ken) and am looking for a shamisen shop (nagauta probably) in the area. Can anyone give me directions ? If nothing is possible nearby, I will try Tokyo, Osaka or Nagoya. Thanks. (By the way, I leave Japan in two months, so my choise must be quickly made)